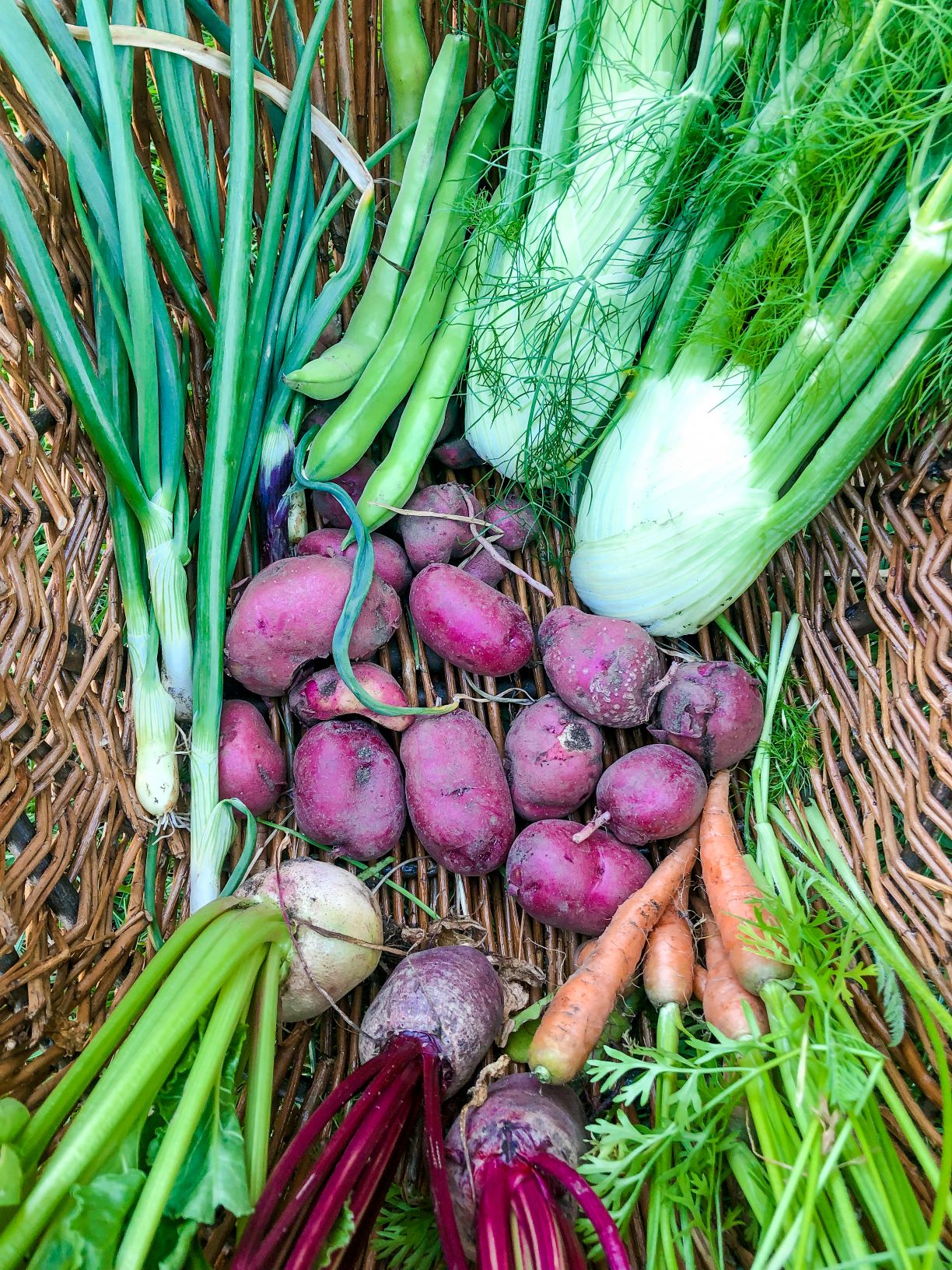 There are two types of succession planting. The first type is where you sow a small amount of the same plant frequently to ensure continual harvests over a longer season. This is used for crops that give a single harvest per plant, such as carrots, beetroot, cabbage, cauliflower or heads of lettuce.

The second type of succession planting is planting different crops once previous crops have finished or are soon to finish. This type of succession planting can help you have a longer growing season and yield more from the space you have. Here in the UK we are fortunate to have a relatively mild climate, enabling us often to get two or possibly even three crops from the same growing space in one year.

It is very common for large growing spaces to lie fallow for at least half of the year. In some countries, it is too cold to grow anything through the winter so this is inevitable. But if you have a milder climate, then it is definitely worth succession planting. Given the climate crisis and the destruction of the natural world to create space to grow food for our ever growing population, I feel that if you are fortunate enough to have the space to grow food then you should try to ensure that the space is filled with crops for most of the year. It is also more beneficial for your soil to have something growing than to leave it bare. This is because the microorganisms that keep the soil healthy feed off the plant roots (in exchange they make the nutrients in the soil bioavailable for the plant).

Succession planting does take a bit of forward planning. It’s important to know when you expect crops to finish. It is definitely something that will take practice and experience to perfect. It is worth keeping a journal of sowing and harvesting times of everything you grow so you can refer back when planning successional plantings the following season. Weather patterns may affect this however, particularly with crops that continue fruiting until the first autumn frost. Be prepared to potentially remove plants that are still producing for you to make room for the next crop. I’d much rather remove some plants a couple of weeks early so I can grow an extra crop to feed us through the winter and early spring.

The most important thing when planning is to make sure you include your favourite crops first. Learn when they can be planted out and when you can expect your harvest to be finished. For example, there are many warmth loving plants that shouldn’t be planted out until mid-May or even June in much of the UK. These include beans, courgettes, winter squashes, cucumbers, peppers and tomatoes. These crops are also likely to be finished or giving poor yields by the end of September. By knowing this you know you can plant something before and/or after these crops.

As a general rule of thumb, many plants can be planted out around a month after sowing. There are of course exceptions to this rule. It is worth noting this though, because you can get a head start on your next crop while the first crop is still in the ground. It is often possible to plant seedlings between the previous crop. This enables them to establish themselves whilst you are still harvesting the first crop.

It is worth familiarising yourself with some crops that grow quickly which enable succession planting. Some crops take most of a season to produce, such as brussel sprouts or purple sprouting broccoli. Other plants can be ready to harvest 2-3 months after sowing. Lettuce, salad leaves, carrots, beetroot, radish, turnips, kohl rabi and bulb fennel are all examples of quick growing crops. For this reason, they can be great to grow before or after other crops.

I’m growing some of these even if I don’t like them or haven’t tried them before. I feel that I have a responsibility to make my growing space as productive as possible. If we don’t use all of this extra produce, we can always give it to family, friends and neighbours or even list it on Olio. If I can’t find enough people to use my surplus produce, then it can be compost to feed future crops. I’d much prefer to have my soil full of produce for most of the year which is why I do this.

Last year I harvested all my broad beans by mid-June. Because I plan to plant out my kale around this time it seemed like the perfect fit. My broad beans are currently slightly behind compared to this time last year, so plan B for kale will be where I currently have field beans growing for green manure. This is a great example where succession planting may not always go exactly to plan. Be prepared to be flexible and possibly even pot on seedlings into larger pots until you have the room to plant them out.

This is one I’ve read many times. Onions and carrots are great companion plants because the scent of the onions supposedly deter carrot fly. I expect to harvest my onions around the turn of July/August, so I will direct sow my maincrop carrots between the rows of onions about a month before.

Last year I planted out my PSB around mid-July. This worked fantastically for me for a winter/spring crop so I intend on using the same timings this year. My carrots and beetroot were sown mid-late March, and I expect to finish cropping them mid-July to the beginning of August. Meanwhile, I can clear space where I need to plant my broccoli, and let the plants establish themselves while I continue to harvest my first crop.

Growing garlic over winter enables an earlier crop around the end of June/ start of July. There is plenty you can still plant after your garlic and this year I’m choosing lettuce. When I plant my garlic to over winter in October, it can go after any of my summer crops which will be harvested by then.

This is a great example of how you can fit three crops into the same patch in a single year. Turnips, kohl rabi and radish are all quick growing crops that can be sown relatively early in the year. Dwarf French beans are quicker to grow than climbing ones, so can be planted in June or July quite happily. Finally, spinach is a very cold hardy plant that can be planted out in September between your beans as their harvest is coming to an end.

One huge positive of early potatoes is that they are in the ground for less time enabling a greater range of options for succession planting. First earlies can be out of the ground in June, and second earlies in July. Once I start harvesting my first earlies, I will plant a squash plant in their place. Then as the squash grow I can continue to harvest the rest of my first earlies to give it space. After I’ve harvested my second earlies I will plant some savoy cabbage and chard for autumn and winter harvests.

Kaibroc is a type of fast growing broccoli. If sown too early in the season it is prone to bolting, so sowing in the summer while the days are shortening is ideal. Chicory is another crop that can be sown in the summer and can withstand some frost as we head into the autumn.

I was very excited to find a quick heading calabrese variety from Real Seeds. These calabrese I am hoping to crop around late May and June, which will enable me to have many different planting options for after. This year I will plant my leeks after my calabrese.

This is one for my greenhouse. It seems like such a shame to have nothing growing in my greenhouse throughout the winter. Once my tomatoes are coming to an end I will interplant different types of salad, spinach and also sow some carrots. These will hopefully provide small harvests for me through the winter and larger harvests into the spring. I’ve been told that sowing carrots in the greenhouse in the autumn can give you lovely harvests as early as March, so I look forward to trying this.

Squash is potentially a little bit more tricky to interplant between so I will probably wait until I have cleared the plant before planting the next crop. Squashes are harvested in late September/ early October so there is still time to plant a range of salads or onions and broad beans for overwintering and an earlier harvest the following season.

Author: Katie
Filed Under: Grow Your Own
Tags: gardening, Grow your own, kitchen garden, self sufficiency, succession planting
April Gardening Jobs – Preparing your kitchen garden for summer
Seeds I’m sowing in May