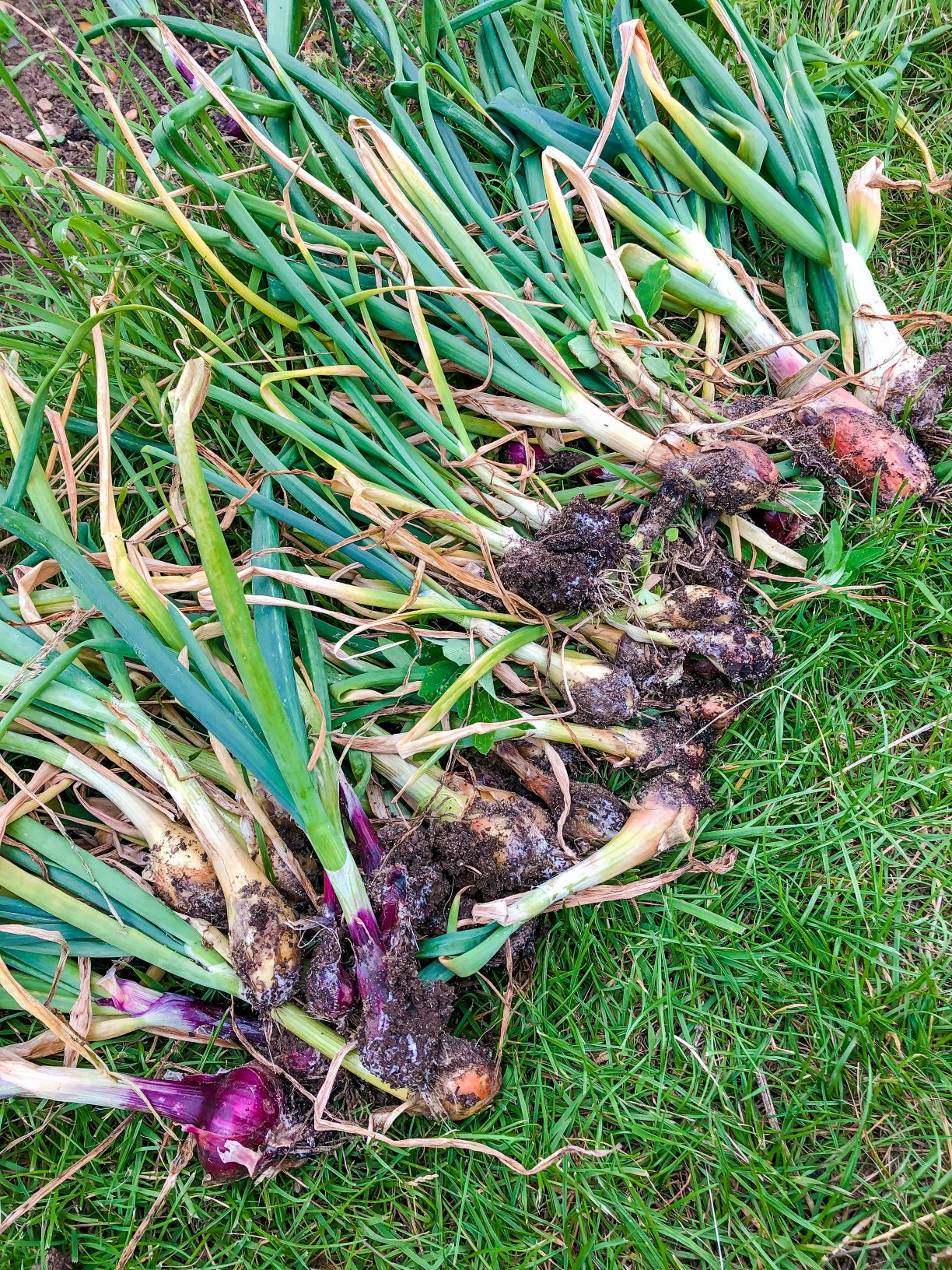 Wouldn’t it be nice if we could just grow plants without worrying about pests and diseases? Once you start your gardening journey you quickly learn that the natural world wants to eat your produce just as much as you do. I find that protection is a necessary evil for almost every crop I grow. The good news is that most pests can be prevented or controlled through the use of netting, fencing and companion planting. Diseases, on the other hand, are often much more tricky to deal with.

Upon returning from holiday I discovered that many of my onions had been struck down by allium white rot. Often referred to as ‘onion white rot’ or simply just ‘white rot’, this disease is a fungus that can live in your soil for up to 20 years. It is very commonly found on allotments, and due to the nature of allotments it is often spread across most plots on a site over time.

This disease affects anything in the allium family, including onions, garlic and leeks. Garlic seems to be the most susceptible to white rot. The first year I had my allotment I had some garlic that was growing tremendously. You can imagine my excitement to harvest my first garlic – only to discover upon harvest time that my entire crop had been wiped out. The only survivors were most of my elephant garlic. Elephant garlic is actually more closely related to a leek than garlic which is why it is less susceptible. Leeks are the least susceptible and onions fall somewhere in between.

White rot is a disease that doesn’t present itself until it is nearing harvest time and the damage to your onions is already done. The most visible sign is yellowing and wilting of the leaves, starting from the top of the leaves downwards. Onion leaves can yellow slightly at the top as it nears harvest time but the outer leaves should usually die off first. White rot attacks the roots of the plants, so you will find infected plants will come up very easily. You will then likely see a white fluffy mould-like fungus on the onion. You may find some of the onion is OK to use but it will not store so use it immediately or freeze it.

I have white rot in my soil – what can I do?

Unfortunately unless you grow none of the allium family for 15-20 years in your soil, you’re not going to be able to eradicate it. Crop rotation is the main thing you can do to reduce build up. If possible, try not to  grow alliums in the same soil for at least four years. It is important to pull up plants as soon as you notice signs of white rot, to stop the fungus from multiplying further. Do not compost any of the plant material – burn it or put it in your black bin.

The germination and growth of this fungal disease is inhibited above 20C, so it is more prominent in cooler, wetter summers. The dormant fungi cells only germinate once, so if there is no food source for them then they will die. Many sources suggested infusing water with garlic granules or crushed garlic, and watering an area with this prior to planting any alliums. The theory is the scent of the garlic should trick the white rot fungus into germinating, then they will die because they have no food. It is best done when the soil is at optimum temperature for the germination of the fungus – 15C-18C. There seems to be little research or evidence if this actually works, but I think it is worth a try!

How can I prevent white rot from entering my garden?

If you’re lucky enough not to have this disease in your garden, then you should do you best to keep it out. White rot is often transferred via contaminated soil on tools, boots or plants. If you buy plants, make sure they are certified as disease free. Alternatively it is best practice to grow everything from seed if you can. This includes growing onions from seed instead of sets too. This is also a good reason to buy garlic bulbs from a retailer specifically for growing rather than just using a cheap bulb from a supermarket.

A final note on multi-sowing

This year I multi-sowed my onions. I have loved using this method because it is more space efficient and saves time when planting out. However, when you have allium white rot in your soil, unfortunately when one onion in a clump gets infected, the whole clump gets infected.

I feel like so far this year I have lost more onions than I did last year to white rot. There are many factors which could be at play here. It’s been a much cooler and wetter year which means white rot is more prominent, the area I planted my onions may be more severely infected, or it could be because I multi-sowed. Next year I have decided I will grow a mixture of single-sown and multi-sown onions so I can compare them and hopefully understand more.

Author: Katie
Filed Under: Grow Your Own, Uncategorized
Seeds I’m sowing in July – Keeping the ground full and planning for autumn
Preventing, spotting and dealing with tomato and potato blight

2 thoughts on “Onion white rot: how to prevent, detect and manage white rot”