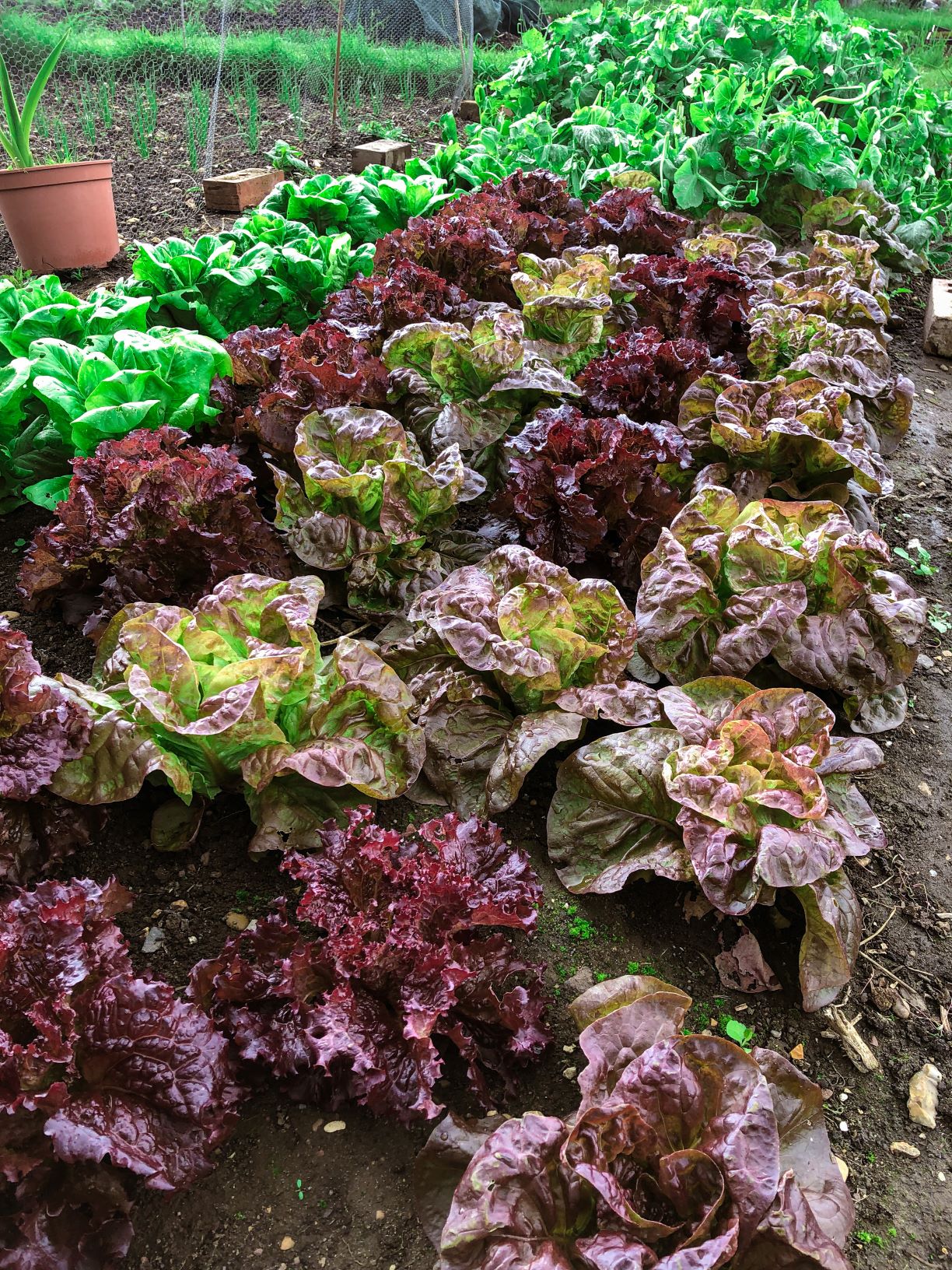 After a rather challenging May, the days are finally warming up and it finally feels like spring. The warmth, the rain we’ve had and the long days are the perfect combination for plants to grow. I feel like if I miss just one day at the allotment I now really notice the difference when I next return. It makes every trip there so exciting to see what’s new. This time of year really does fill my heart with pure joy.

If you feel like your plants outside have got off to a slow start, don’t panic because you’re not the only one. The harsh weather conditions we’ve experienced this spring in the UK has slowed everything down. Many gardeners are saying that we are probably 3-4 weeks behind where we should be thanks to this. The one thing I have found that has helped me this season has been investing in a good amount of fleece and covering the majority of my plants. They are still a little behind but there is a huge difference in the plants that have been under fleece compared to those that have not.

The nice weather means that this bank holiday weekend gives us the perfect opportunity to play catch up in our gardens. It feels strange to be thinking about sowing seeds for autumn/winter crops when spring feels like it has only just begun, but June really is a great time to start. Now that the majority of the UK is past the last frost date, it is also a great time to start planting out your warmth-loving plants.

Seeds I’m sowing in the first half of June

June’s sowing list is much smaller than previous months for me. I will be sowing some seeds slightly later than I had originally planned because most are for second plantings and my first crops are slightly behind. For instance, I had planned on sowing my maincrop of carrots towards the end of June between my onions, but my onions have been slow to get going so I will now probably wait until July.

At some point during the first half of June, I will sow my second main sowing of lettuce. This will be to eventually replace the first sowing of lettuce I did during February. On my main crops of lettuce I am only harvesting the outer leaves for continual cropping. I have also continued to sow Little Gem a few times since February for crunchy lettuce hearts. I prefer harvesting outer lettuce leaves purely because it reduces the need to succession sow so frequently.

Towards the middle of June I will finally sow my purple sprouting broccoli. Many people rush to sow this much earlier because the packet says so. I accidentally started mine late last year and they weren’t transplanted until mid-late July. We had such a fantastic crop, so I’ve decided to do the same again. This has also enabled me to have a planting of carrots and beetroot before my broccoli. I have written a whole separate post on succession planting here if you wish to know more.

Seeds I’m sowing in the second half of June

In the second half of the month I will also sow cauliflower for autumn harvests and savoy cabbage for autumn/winter. There is less of a need to succession sow cabbages for winter because the cool weather and short days will keep them from bolting quickly. Cauliflowers don’t tend to stand well for as long as cabbages so I will continue to succession sow these.

Finally, in June I will sow my maincrop of beetroot and also my chard. I will once again multi-sow my beetroot in modules before planting them out sometime during July. Chard is another crop that many people sow earlier. However, you can continue to sow chard right through June and July. I prefer a later sowing of chard, purely because I know I wont eat it during the summer because there is so much else cropping. Sowing chard in June should enable cropping from late summer right through until May next year (weather dependent of course!).

Finally, we have reached a time where we can plant out our frost tender plants. Our last frost date is mid-May but many warmth-loving plants wouldn’t have enjoyed the cold, winds and hail that we have experienced over the past couple of weeks. Now is a great time to start planting out, now that the weather is looking more settled for at least the next week or so. This will give the plants a chance to establish themselves enough in case we have any adverse weather later in the month. Hopefully that won’t happen but it’s best to look ahead at the forecast before planting.

Over the bank holiday weekend and the first week of June I will be planting out my tomatoes, beans, sweetcorn, cucumbers, courgettes and winter squash. Finally I will be able to walk in my greenhouse again! This will also enable me to finish planting in my greenhouse because I will actually have the space. I’ve also got lots of flowers and herbs to plant out, including my dahlia bulbs (which I never got around to potting up in my greenhouse). This time of year is such a busy and exciting time in the garden.

This week I finally removed the fleece from my plants. It’s so nice being able to see everything so much easier. However, it is still a good idea to keep your plants protected because of pests. Whilst my onions are still quite small, I have a fence around them to protect them from rabbits. Once the onions are larger I will remove the fence. Many people may cover onions in mesh to protect them from allium leaf miner but I haven’t had a problem with this pest yet (I’m sure I will live to regret saying that). Allium leaf minor is most commonly found in leeks, so when I plant my leeks out I will cover them in mesh.

I have covered my carrots with mesh to protect them from carrot root fly. You can also use a mesh barrier because they supposedly only fly up to around 2ft high. However, my 2ft high mesh barrier didn’t prove high enough last year, so look for ones higher than this. Brassicas are also important to protect from both pigeons and the cabbage white butterfly. I use this shade netting which I find great for brassicas during the summer months to prevent them bolting when the sun is intense. Just make sure any netting for brassicas is too small for the butterflies to get through.

Sweetcorn is another crop that is popular among wildlife. At my allotment it is luck of the draw if the badger chooses yours. Badgers can be difficult to protect against because they are known to go under as well as over, but do your best. Finally I am also protecting my young bean and pea plants, largely from rabbits and pigeons. They are usually of less interest (particularly the beans) once the plants get larger, so this is only temporary. Avoid using netting with larger holes. The plants will just grow through the netting and it is a complete nightmare trying to set them free again.